Atlanta’s industrial market smashed records for net absorption, leasing volume and rent growth in 2021, and the sector is heading into 2022 in a strong position.

However, traditional key indicators, including net absorption and leasing volume, may not capture the full story of the market’s performance going forward.

Net absorption is inherently limited by the amount of space tenants are able to physically occupy. Atlanta’s vacancy rate is hovering at a record low of roughly 3.5%, indicating very few vacancies exist across the metropolitan area.

Therefore, net absorption will likely track closely with net completions, at least in the near term, as prospective tenants looking to expand in Atlanta gravitate to new properties because those are essentially the only ones with suitable space available.

Because of this phenomenon, net absorption in 2022 is likely to slow compared to the more than 36 million square feet absorbed in 2021. However, that slowdown will not be due to a lack of demand, but rather a lack of available space in the market. 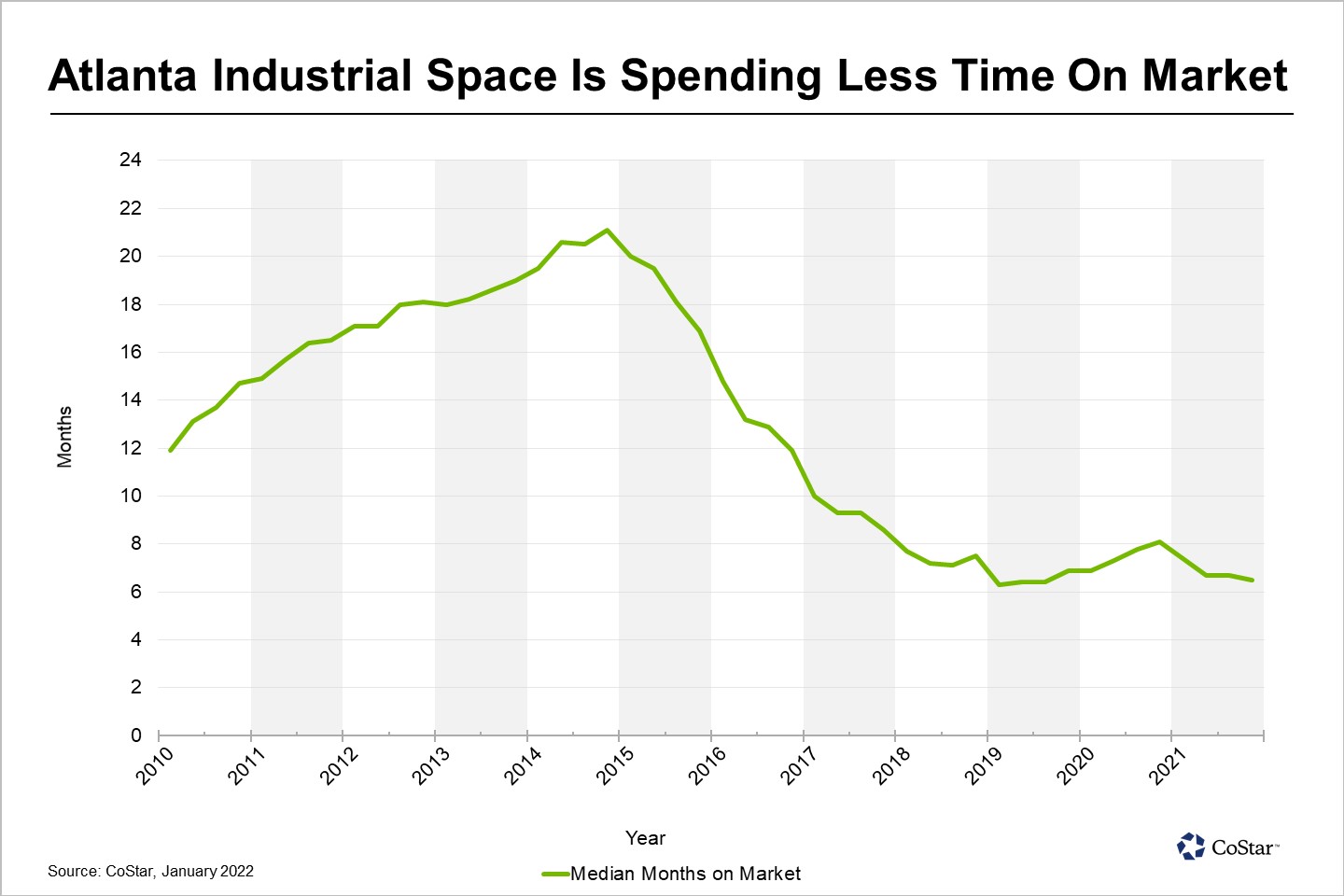 Of course, there are other ways to quantify and track the health of the market, such as leasing volume and rent growth.

However, when looking to quantify demand trends, it is useful to analyze how long space has been on the market before it is leased, which gives a sense of the velocity of leasing activity. This is valuable, as it is important to understand how long it may take to backfill a relet availability or to fill a new speculative facility once that space hits the market.

Median months on market tracks how long industrial space in a given geography has been marketed as available. In Atlanta, the median months on market plummeted from more than 20 months in 2014 to about six months by early 2019, and has hovered between six and eight months since then. This shows that there are few industrial listings in Atlanta that have been sitting on the market for an extended period of time, and that most of the current listings in the market have only been available for a few months.

Both of these stats indicate that when industrial spaces come on the market in Atlanta, they are being quickly snapped up by tenants relative to the market’s historical norms.

Even if industrial net absorption slows in Atlanta in 2022, as long as the median months to lease and months on market remain at or near record lows, the region’s vacancy rate will likely remain low and owners will remain in an advantageous position to hike rents at a breakneck pace.